Nino returns to help Elche in the fight for promotion

Elche have an interesting history and play at the impressive Manuel Martinez Valero stadium, which has also hosted Spain games. They were enjoying top-flight football against the likes of Barcelona, Real Madrid and Atletico Madrid in 2013/14 and 2014/15 but were unfortunately relegated to Segunda A because of excess debts. In 2016/17 they were relegated to Segunda B after 18 years of playing in the first and second divisions. So we can expect Elche to be fighting for promotion this season.

Defenders
Adrian Jiminez: Played more than 60 games in the past two seasons at CD Toledo, the defender can play at centre back and right back.
Corozo: U23 rightback who has played 80 games in Segonda B with the Granada reserves.
Edu Albacar: The 37-year-old (who will be 38 in November) has come out of retirement to aid his beloved Elche after a year as the technical secretary at the club. He is the top goal-scoring defender in the club history and was captain when they won promotion to the first division.
Roman Golobart: The Catalan defender was at Real Murcia last season, playing more than 30 matches and taking part in the promotion play.offs. He has also played for Racing de Ferrol and Wigan Athletic.
Gonzalo Verdu: The central defender played for two seasons for his home-town club FC Cartagena, where he was one of their most outstanding players.
Jose Gabriel Peris: The left back joins Elche from Villarreal B and has a lot of experience in the Segunda B division, having played more than 170 matches.
Primi: Primitivo Ferriz has renewed until 2020, the club he has called home since he started in the Benjamin A side at the tender age of nine. He has passed through the ranks to join the first team. With his renewel, Elche have ensured they have the commitment of a player with Los Franjiverdes' DNA.
Tekio: The right back has joined from UCAM Murcia for three seasons, Sergio Blazquez Sanchez, known as Tekio, has been playing for the university side and is a very experienced defender, with more than 80 matches in Segunda B with the Murcia side. 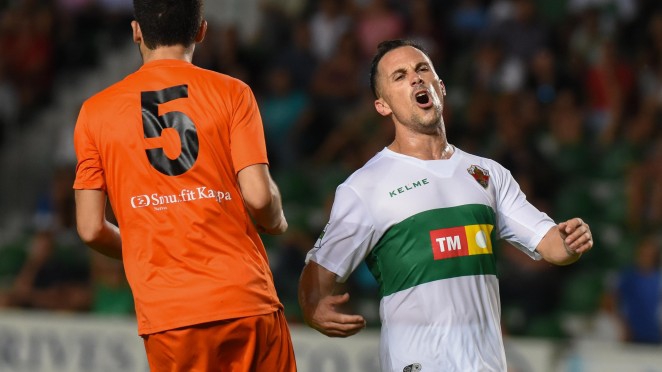 Midfielders
Juan Jose Collantes: The right winger is a colleague of Tekio's where he played alongside him at UCAM Murcia, taking part in 34 games and scoring three goals. He has extensive experience in Spanish football signing for teams like Rayo Vallecano, Granada, Cartagena, Sabadell and Alcorcon, altogether notching up more than 450 games in the second division.
Diego Benito: The midfielder was at Real Murcia last season and was involved in 28 games including the playoff promotions. He started with Rayo Vallecano reserves and played four times for the first team in the first division.
Ivan Calero: The U23 left-winger has extensive experience in European football. He started out in the youth sides of Atletico Madrid but has also played for Derby County and Burton Albion and returns to Spain via Sparta de Rotterdam.
Ivan Sanchez: The central midfielder is another player with much experience playing in the second divisions. He's worn the shirt of Real Jaen, Almeria and Albacete Balompie among others.
Javi Flores: Elche welcome back Javi Flores, who was a part of one of the best franjiverdes sides in recent years. He comes back after spending a season at Real Murcia and two with Hercules.
Manuel Sanchez: A midfielder with second division experience, his teams have included Alcorcon, UCAM Murcia and CA Osasuna.
Daniel Provencio: After three seasons at CD Mirandes competing in more than 80 matches and becoming one of their most outstanding players, the midfielder has joined Elche.

Forwards
Benja: Signing Benjamin Martinez is a major coup for Elche as he was one of the top scores in Segunda B last season with his 26 goals. He started at the Barcelona academy before playing with the likes of Girona, Cordoba, UD Las Palmas, CE Sabadell and UE Llagostera.
Lolo Pla: Manuel Coronado Pla scored 14 goals in 24 games for CD Toledo last season. He came up through the ranks of Real Valladolid and made his first division debut with them at the age of 19, He has also played for SL Benfica, CD Lugo and Cadiz.
Nino: The fans will be delighted to see the return of Juan Francisco MartÃ­nez Modesto - Nino - after 10 years. He is made in Elche and is a legend after eight consecutive seasons defending the shirt. He returns to Elche as the top scorer in the history of the second division and with the intention of breaking more records. The legend lives on!
Sory Kaba: The Guinean striker has renewed for three seasons, so fans can enjoy the goal-scoring ability and physical strength of Sory until 2020. He scored 14 goals in the third division with the Elche reserves last season before scoring a goal at the Martinez Valero stadium against Reus Deportiu on his first-team debut.

Coach
Vicente Mir: Former Valencia forward Vicente Mir is the new coach at Elche. He played mainly in the lower leagues and played for Elche from 1992 to 1995 scring 22 goals in his 78 appearances. His managerial career started in Benidorm in 2004 and he has also managed Valencia youth and B sides, Elche B, Hercules and Murcia.