How is Christmas celebrated in Spain?

Christmas in Spain is a magical time of year - Feliz Navidad

Christmas in Spain is a very special time of year. The towns are lit up, the Christmas trees are put up and the beautiful belén or nativity scene adorn each town. Like everywhere, some towns and cities like to be shinier, brighter and bigger than others - Malaga springs to mind with its amazing lights - but everywhere is beautiful.
It’s lovely to see Spanish Christmas and New Year traditions being honoured year after year. The festivities begin on December 6 for the Feast of the Immaculate Conception and continue to January 6 for the Day of the Three Kings. Let’s take a look at how Spain celebrates Christmas and the important dates in the Spanish Christmas calendar.
Spain has its own unique celebrations such as El Gordo (the fat one) Christmas lottery, the food such as turrón and Roscón de Reyes cake, eating 12 grapes during the 12 bongs at midnight on New Year’s Eve, wearing red knickers for good luck on New Year’s Eve, and putting a figure taking a poop in the nativity scene or belén.

How is Christmas celebrated in Spain?

Laughter, food, drink, songs, noise, colour and light all feature in a Spanish Christmas. It’s a beautiful mix of religion and a whole lot of fun. It’s a time for family and friends. If you buy special lucky red pants for New Year’s Eve, get a larger size than normal. You’re going to be eating to excess at Christmas-time in Spain.

Christmas in Spain lasts a whole month. Traditionally gifts were exchanged on January 6, with the arrival of the Three Kings. So children had two weeks off school and then received their gifts on the day before they returned to classes. Now, children get two lots of gifts - Christmas Day and Three Kings’ Day.
Spanish Christmas traditions involve food, of course, chocolate, turrón and cava. The religious element of Christmas is also remembered with many families putting up a belén or Christmas crib. Towns and churches will also have a belén and many of them are extremely lavish. Christmas in Spain is definitely a time for families to get together and enjoy quality time together.

Traditionally, Spanish families will get together for a big meal on Christmas Eve before going to Mass. Food could be lamb, fish, shellfish, prawns or jamon. Take a look at the price of large fresh prawns just before Christmas as they can go sky high. The famous Denia red prawns can cost €200 a kilo or more at Christmas-time.
Turrón, which is a type of nougat and comes in different flavours such as nut or chocolate, is also traditionally eaten at Christmas. The best turrón is made in Xixona and you can visit the turrón museum in Xixona to see how turrón is made before sampling some of the famous Christmas sweets. Our favourite turróns from Jijona are from the 1880 brand - simply delicious.
There’s also a special cake to eat on Three Kings Day, the Roscón de Reyes, a creamy affair with a surprise inside!
There are super Spanish Christmas traditions to keep on different days. The special dates in your Spanish Christmas calendar are:

This is the day when Mary was told she was expecting the son of God. It means Christmas is on its way and it’s time to put up the decorations. Christmas trees are relatively new additions to the decorations as traditionally it is the belén or nativity scene which takes pride of place. One addition to the belén alongside Mary, Joseph, Jesus, donkey, et al is a caganer, which is a little figure taking a poop. It can be a famous person or politician squatting, such as Theresa May, Donald Trump, Bono or Messi.

Now’s the time for some serious number-crunching. The Lotería de Navidad is filmed live on LA1 and lasts a whopping three-and-a-half hours. The lottery has 195 series of tickets with 85,000 tickets in each series. A complete number would cost an eye-watering €39,000. Luckily they are split into series with each one costing €200 and each ticket then divided into décimos costing €20 each.
Associations, such as the fiesta organisers, and football clubs will buy décimos and split them further into papeletas which they will sell to supporters for €3 or €4 each. Part of the money is used to pay for the décimo and the rest goes to support the club.
The lottery raises €3,315,000,000 with 70% going back in prize money and the other 30% distributed in management fees and the Public Treasury. There are 26,001,300 prizes, so there is a very good chance of being a winner. All 85,000 numbers go in a drum and the prizes are put in another smaller drum. The tickets are drawn out by children who then sing out the numbers and the prizes. The biggest prize of all, El Gordo - the fat one, is worth €4 million.

The night kicks off with the King’s Speech. King Felipe VI delivers his Christmas message at 9pm. After watching this together, at around 9.30pm families will sit around the table to enjoy a feast of their favourite foods. This could be lamb, fish, or prawns. The older members of the families will go to Midnight Mass (Misa de Gallo) while the younger ones will go out to a disco. There could be much singing of Christmas carols (villancicos) Popular villancicos include Los Peces en el río (the fish in the river), Campana sobre campana (bell over bell), and El tamborilero (The drummer boy).

Food takes centre stage again. Many families will eat at home on Christmas Eve and then go out to a restaurant on Christmas Day. Only some parts of Spain, such as Cataluña, celebrate St Stephen’s Day or Boxing Day but not in the Comunidad Valenciana which includes the province of Alicante. For many, it is a normal working day.

This commemorates the slaughter of children under two years old who were born in Bethlehem. King Herod I ordered the slaughter of the innocents in a bid to get rid of the newly-born Jesus of Nazareth.
It is also the Día de las Bromas, which many other countries celebrate on April 1 or April Fool’s Day. There will be silly fake news in the Spanish media and people will play practical jokes on each other. In Ibi, in the province of Alicante, they host the Día dels Enfarinats, or Flour Fight. There is an almighty battle of flour and rockets during the rather bizarre fiesta. 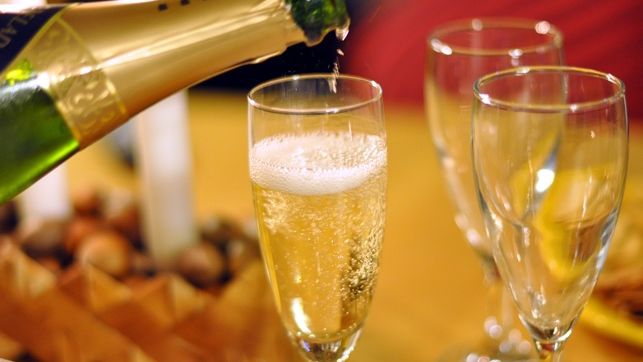 It’s definitely party night in Spain with lots of food, drink and music. Then when the 12 bongs count down to midnight, it is lucky to eat 12 grapes for each of the bongs. The whole of Spain takes part and, for those not quick enough to have eaten all their grapes by the final bong, have to kiss and say Feliz año nuevo with a mouthful of grapes. The trick is to get a tin of peeled seedless grapes from one of the supermarkets. Oh, and make sure you’re wearing your red pants/knickers to bring much luck for the following year to. The eating grapes on New Year’s Eve started in the early part of the 20th century when there was a glut of grapes. Someone had the great idea of getting the whole of Spain to eat 12 of them during the count down to midnight. The 12 peals are slower than usual to give you more time to get those grapes down your neck and then raise a glass of cava at midnight. Feliz año nuevo!
At around 5am or 6am on New Year’s Day, in Madrid it is traditional to have hot chocolate with churros (doughnuts) but in the Comunidad Valenciano we have hot chocolate with buñuelos, which are also doughnuts.

Recovery time! This is a day for eating out in restaurants or slumping in front of the TV and watching classic films like Grease or Bridget Jones.

These parades are fabulous. It’s a time for the children to get very excited to see the Three Kings parade and get even more presents. The Kings could arrive by boat, on horseback, on camels, on elephants, who knows? They throw out sweets for the children and it can get a bit hectic as all the kids surge forward to make sure they get their fair share of sweets.
Children on the naughty list won’t get presents but they will get the ‘carbon de Reyes’ which is supposed to be coal but it’s really a sweet.

Another day for eating while the children try out their new presents. Traditionally, Spanish families will eat the Roscón de Reyes cake, which has two surprises in it. The first surprise is a King and if you find this in your slice of cake, then you get to be King. The other surprise is a haba or bean. If you get the bean, you have to pay for the cake.
The Spanish will also eat turrón, the famous nougat-type sweet, traditionally made in Xixona. They will also be eating polvorónes, which are very crumbly, dry biscuits. The trick is to get someone to say ‘Pamplona’ when eating these polvorónes and collapse in fits of giggles as they spray biscuit crumbs everywhere.
Another traditional Spanish sweet for Christmas is the pastelitos de boniato - sweet potato pies.

How do you say Merry Christmas in Spanish?

How do you say Happy New Year in Spanish?